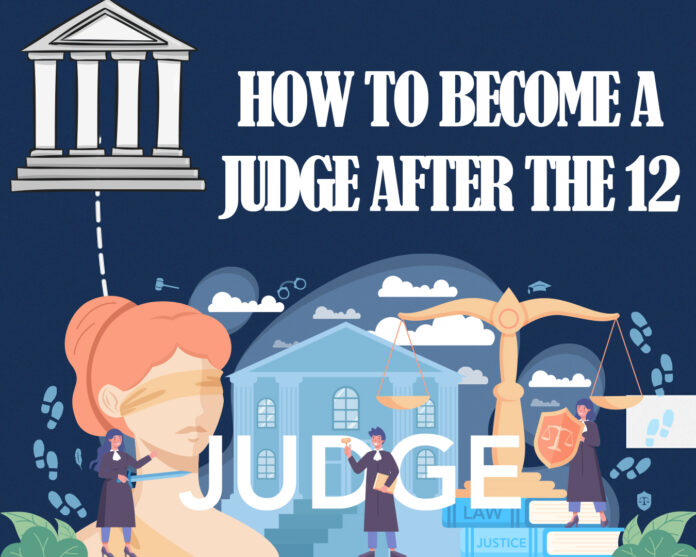 The route to becoming a reputed and revered Judge is not simple. It entails dedicated hard work to lead a auspicious and secure career. Almost every other Candidate wishes to become a judge in their career. Hence, to attain the prominent position of a Judge. You need to have a Law Graduate Degree from a genuine law school. Next, either you clear Judicial Service Examination or gain Experience of more than 15 years by practising law from a Sub-judge to the position of a Judge. To become a Judge after the 12th Standard, you need to enrol in 3 or 5 Years of integrated law courses. Either by clearing the Law Entrance Exam like CLAT, AILET, DU LLB, LSAT, etc. or by taking admission to the top Private institutions commonly known as Self-Fledged Schools. So, you can Kick-Start your Preparation by Enrolling in the Best CLAT Coaching Institutes.

How to Become a Judge in India after the 12th?

Step 1: Procure a Bachelor of Law (LLB) Degree
After the accomplishment of the 12th Standard, Students who want to pursue their career as a Judge should join 3 or 5 Years of integrated Law Courses. Thus, Candidates should appear in the law Entrance Exams such as CLAT, AILET, DU LLB, and other state Law Exams. After clearing these Law Exams, Student is eligible for the 3 or 5 Years of integrated law courses from top law schools. Or the Aspirants attain a degree from the Top Private Institutions. Hence, candidates must own an LLB Degree to pursue a career as a Judge.

There are two phases of Judicial Services Examinations –

1. Preliminary Examination – The Preliminary round consists of objective-based questions, I.e. Multiple Choice Questions. The Minimum Passing percentage needed for the general candidates is 60 per cent, and for the reserved category, 55 per cent.

2. Main Examination – The Main phase is of subjective mode. In this phase, candidates are entrusted with subject-based questions and answers. Candidates must score at least 40% in each subjective paper to qualify for the next round.

3. Viva Voice (Interview) – The last phase is the Interview round, adding up to the recruitment process.

Lower Judicial Services (LJS)
You must gain an LLB Degree and sign up as an advocate under the Advocate’ Act 1961 to be eligible to appear in this LJS Examination. Even final-year students can appear in this LJS Exam without Experience. This LJS Exam is held to appoint Civil Judges for the Judicial Proceedings in various state courts in India. This LJS Exam is held by the State Public Service Commission (SPSC) or the High Court.
Eligibility: Candidates must have a 3-year integrated LLB degree or a 5-year integrated LLB degree.
Age Limit: The Age of Candidates is not required to be below 21 years; the lower and upper limits are not above 35 years. Relaxation in the upper age limit is endowed to candidates based on their respective OBC/SC/ST/PwD categories per government norms. Nonetheless, the Age limit of the candidates may vary from State to State.
Syllabus: For the syllabus, refer to the official website of the commissions that conduct the annual LJS Examination. The Syllabus of the Lower Judicial Services (LJS) Examination is based on the law subjects such as the Indian Penal Code (IPC), Code of Criminal Procedure (CrPC), Code of Civil Procedure (CPC), Civil Law, Constitutional Law, Property Law, and others with insertion of local laws. Other sections, such as English, General Knowledge, Current Affairs, and State’s local language, are also enclosed in the syllabus.

How can you Become a Judge in Supreme Court in India?

Qualifications of Becoming a Judge in the Supreme Court in India:

Besides this, an applicant is also eligible even when they are an exceptional jurist, according to the president of India.

How can you Become a Judge in High Court in India?

High Courts hold the Judicial measures of States. There are approximately 25 High Courts present in India. For Each State and Union Territory of India, the supreme court of appellate jurisdiction is High Court.
Qualifications of Becoming a Judge in High Court in India

Can you Become a Judge without giving any Exams?

Final Verdict:
The Job of a Judge contains a considerable extent of Prestige in terms of imminent Decision-making, Responsibility, and Up to date with the current scenario. Hence, after going through the article, you must have learned about the career path after the 12th or “How to Become a Judge after the 12th class”. We have tried our best to offer detailed and conceivable content to you. Though, if you still have any doubts regarding the above section, you comment in the comment section. Your query will be replied to shortly within 24 hours.

How Plagiarism Remover Is Useful for Academic Writing?

How to Become a Judge after the 12th?

Ashvin - 22/10/2022 1
The route to becoming a reputed and revered Judge is not simple. It entails dedicated hard work to lead a auspicious and secure career....

How Plagiarism Remover Is Useful for Academic Writing?

Reasons You Should Learn Digital Marketing In India

How to Become a Judge after the 12th?

The route to becoming a reputed and revered Judge is not simple. It entails dedicated hard work to lead a auspicious and secure career....
Read more

As we are heading into the era of globalization and technological advancement, every other individual is striding toward better prospects. But, in this contemporary...
Read more